During the Autumn of Terror hundreds of letters were sent to the police and local press purporting to be written by the Whitechapel fiend. Most of them were deemed to be fakes written by either newspaper men trying to start a story or fools trying to incite more terror. Many Ripperologists believe them all to be hoaxes. Other experts believe some (specifically the Dear Boss letter, Saucy Jacky postcard, and From Hell letter) are genuine. A select few have been reproduced below.

Received on September 27th, 1888 at the Central News Agency, this letter was originally believed to be just another hoax. Three days later, the double murder of Stride and Eddowes made them reconsider, especially once they learned a portion of the latter's earlobe was found cut off from the body, eerily reminiscent of a promise made within the letter. The police deemed the "Dear Boss" letter important enough to reproduce in newspapers and postbills of the time, hoping someone would recognize the handwriting.

A postcard received at the Central News Agency on October 1st, making direct reference to both the murders and the "Dear Boss" letter, is believed to have been written by the same hand. It is reproduced below.

Whether or not the letter is a hoax, it is the first written reference which uses the name "Jack the Ripper" in reference to the Whitechapel murderer.

The original envelope in which the "Dear Boss" letter was sent. All photos courtesy S.P. Evans / M.E.P.O.

Dear Boss,
I keep on hearing the police have caught me but they wont fix me just yet. I have laughed when they look so clever and talk about being on the right track. That joke about Leather Apron gave me real fits. I am down on whores and I shant quit ripping them till I do get buckled. Grand work the last job was. I gave the lady no time to squeal. How can they catch me now. I love my work and want to start again. You will soon hear of me with my funny little games. I saved some of the proper red stuff in a ginger beer bottle over the last job to write with but it went thick like glue and I cant use it. Red ink is fit enough I hope ha. ha. The next job I do I shall clip the ladys ears off and send to the police officers just for jolly wouldn't you. Keep this letter back till I do a bit more work, then give it out straight. My knife's so nice and sharp I want to get to work right away if I get a chance. Good Luck.

Yours truly
Jack the Ripper

PS Wasnt good enough to post this before I got all the red ink off my hands curse it No luck yet. They say I'm a doctor now. ha ha

This letter was received on October 1st, 1888 at the Central News Agency. The handwriting is similar to that of the "Dear Boss" letter, and makes direct reference to both this letter and the murders of the previous night. Those who believe it to be genuine argue that the removal of Eddowes's ear (it was not taken away, nor mailed to the police) and the fact that the postcard mentions the double-event before it was described by the press both testify to its authenticity. Others believe a hoaxer could have gleaned details of both the previous letter and the murders in an early morning paper of October 1st.

Both the front and back of the postcard are reproduced below.

I was not codding dear old Boss when I gave you the tip, you'll hear about Saucy Jacky's work tomorrow double event this time number one squealed a bit couldn't finish straight off. ha not the time to get ears for police. thanks for keeping last letter back till I got to work again.

On October 16th George Lusk, the president of the Whitechapel Vigilance Committee, received a three-inch-square cardboard box in his mail. Inside was half a human kidney preserved in wine, along with the following letter. Medical reports carried out by Dr. Openshaw found the kidney to be very similar to the one removed from Catherine Eddowes, though his findings were inconclusive either way. The letter read as follows:

From hell.
Mr Lusk,
Sor
I send you half the Kidne I took from one woman and prasarved it for you tother piece I fried and ate it was very nise. I may send you the bloody knif that took it out if you only wate a whil longer

signed
Catch me when you can Mishter Lusk

6 October 1888 -- this letter was received by a local paper and is believed to have been intended for either Israel Schwartz or Joseph Lawende, both of whom believe to have witnessed the Ripper and gave descriptions of the man they saw to the police. Few researchers believe this letter to be real.

You though your-self very clever I reckon when you informed the police. But you made a mistake if you though I dident see you. Now I known you know me and I see your little game, and I mean to finish you and send your ears to your wife if you show this to the police or help them if you do I will finish you. It no use your trying to get out of my way. Because I have you when you dont expect it and I keep my word as you soon see and rip you up. Yours truly Jack the Ripper.

PS You see I know your address

No Date Available -- Catharine Eddowes was found murdered near the Minories on 30 September. '1st and 2nd inst.' means the first and second of the month (October). Few researchers give this letter any credence.

Beware I shall be at work on the 1st and 2nd inst. in the Minories at 12 midnight and I give the authorities a good chance but there is never a policeman near when I am at work. Yours Jack the Ripper.

No Date Available -- Prince William Street was only yards from the main road between Aigburth and the office of the Cotton Exchange. Few researchers give this letter much credence.

What fools the police are. I even give them the name of the street where I am living. Prince William Street.

29 October 1888 -- this letter was sent to Dr. Openshaw, who performed the medical examination on the portion of kidney received by George Lusk in conjunction with the From Hell letter. Few researchers give this letter any credence.

O have you seen the devle with his mikerscope and scalpul a-lookin at a kidney with a slide cocked up.

Dated September 17th, 1888, this letter was only recently discovered by Peter McClelland in a sealed report envelope in the British Public Record Office in 1988. Its authenticity is hotly debated, many believing it to be a recent hoax placed surreptitiously in the records. It was first published in Paul Feldman's Jack the Ripper: The Final Chapter. 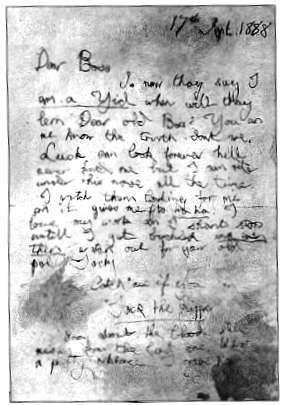 So now they say I am a Yid when will they lern Dear old Boss! You an me know the truth dont we. Lusk can look forever hell never find me but I am rite under his nose all the time. I watch them looking for me an it gives me fits ha ha I love my work an I shant stop until I get buckled and even then watch out for your old pal Jacky.

Catch me if you Can
Jack the Ripper

Sorry about the blood still messy from the last one. What a pretty necklace I gave her.

On September 30, 1888, PC Alfred Long, 254A, found a blood stained apron piece in an archway at Wentworth Model Dwellings, Goulston Street, (c.2:55am) and then a chalked message on the black brick fascia edging of the open doorway which led to the staircase and basement door of #108-119. DC Daniel Halse, City, arrived back at Goulston Street sometime after 3:00am. PC Long returned at c.5:00am. The writing was sponged out at c.5:30am.

PC Long's original spelling, as seen in the above image, used "Jewes," which was corrected to "Juwes," on the scene by DC Halse. This correction was noted in PC Long's notebook and during the Eddowes Inquest.

In the above images, the text of the transcriptions has been maintained, but the "layout" is not indicitive to how it might have been actually written on the wall at Goulston Street.

Typically, the City Police accepted DC Halse's version, while the Metroplitan Police accepted PC Long's version - each backing their own man. And, because of the numerous discussions concerning the word, "Juwes," and what it is supposed to mean, it is interesting to note that there are actually many spellings of "Juwes" to be found within the official records (HO 144/221/A49301C f164, 195, 197; Eddowes Inquest Records):

A lexicon search on the variations will invariably produce the same result - "Jews," with only reference to the group, at large, and not to any person or persons, in particular.

No Date Available -- one of the many verses allegedly sent to police. (It is likely, however, that this letter was a later hoax by Donald McCormick).

Eight little whores, with no hope of heaven,
Gladstone may save one, then there'll be seven.
Seven little whores beggin for a shilling,
One stays in Henage Court, then there's a killing.
Six little whores, glad to be alive,
One sidles up to Jack, then there are five.
Four and whore rhyme aright,
So do three and me,
I'll set the town alight
Ere there are two.
Two little whores, shivering with fright,
Seek a cosy doorway in the middle of the night.
Jack's knife flashes, then there's but one,
And the last one's the ripest for Jack's idea of fun.