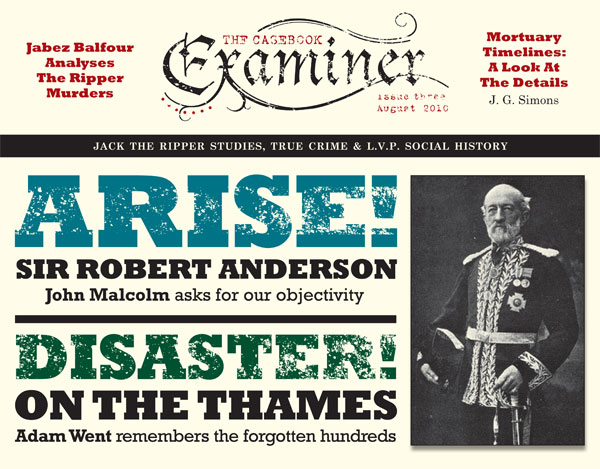 In what should prove a controversial essay, author John Malcolm challenges the conclusions of Philip Sugden with what he feels is a long-needed re-examination of that writer's handling of the evidence in regard to Aaron Kosminski.

Jonathan Simons provides a fascinating mortuary timeline that tracks the events for seven victims from the moment of their death until their interment. This is the sort of information most researchers will want to print out and preserve.

Adam Went takes a new look at a "forgotten" maritime disaster, the sinking of the S.S. Princess Alice. In the process he examines the possible loss of Elizabeth Stride's family and also uncovers a new connection between the tragedy and the Ripper murders.

Moreover, there are the usual regular features like our reviews of books about JtR, true crime and social history; Stewart P. Evans' "Collectors Corner;" Don Souden's column on detective fiction, and up-to-the-minute news in the field provided by "On the Case" and "Extra." This issue "CSI: Whitechapel" looks at the Stride murder and "Casebook Archives" focuses on Frances Coles. Meanwhile, Trevor N. Bond conducts this issue's Ultimate Tour, taking readers from Pimlico to Lambeth and ultimately Southwark. Finally, as ever, Robert Clack brings the issue to a finish with another of his always interesting "Scenes of Crime" photo essays.