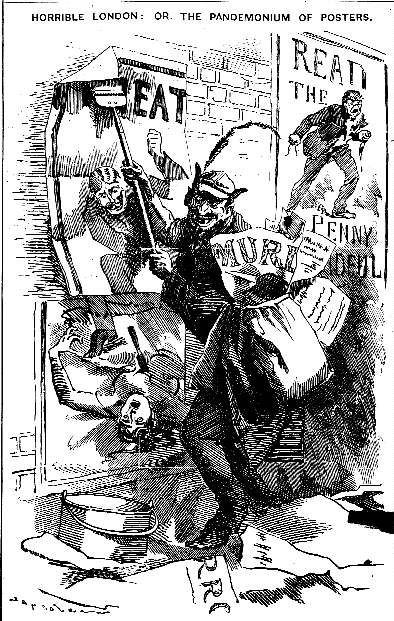 HORRIBLE LONDON: OR THE PANDEMONIUM OF POSTERS.

THE Demon set forth in novel disguise
(All methods of mischief the master-fiend tries)
Quoth he, "There's much ill to be wrought through the eyes.
I think, without being a boaster,
I can give their most 'cute Advertisers a start,
And beat them all round at the Bill-sticker's art.
I will set up in business in Babylon's mart,
As the new Pandemonium Poster!"
So he roved teh huge city with wallet at waist,
With a brush, and a stick, and a pot full of paste,
And there wasn't a wall or a hoarding,
A space in a slum, or a blank on a fence,
A spare square of brick in a neighbourhood dense,
Or a bit of unoccupied boarding,
But there the new poster, who didn't much care
For the menacing legend, "Bill-stickers beware!"
Right soon was tremendously busy
With placards portentous in purple and blue,
Of horrible subject and hideous hue,
Enough to bemuddle an aeronaut's view,
And turn the best steeple-Jack dizzy.
Oh, the flamboyant flare of those fiendish designs,
With their sanguine paint-splashes and sinister lines!
Gehenna seemed visibly glaring
In paint from those villanous daubs. There were men
At murderous work in malodorous den,
And ghoul-woman gruesomely staring.
The whole sordid drama of murder and guilt,
the steel that strikes home, and the blood that is spilt,
Was pictured in realist colours,
With emphasis strong on the black and the red,
The fear of the stricken, the glare of the dead;
All dreads and disasters and dolours
That haunt poor Humanity's dismallest state,
The horrors of crime and the terrors of fate,
As conceived by the crudest of fancies,
Were limned on these posters in terrible tints,
In the style of the vilest sensational prints
Or the vulgarest penny romances.

That Bill-sticker paused in his work with a look
Which betrayed the dark demon, and gleesomely shook
His sides in a spasm of laughter.
Quoth he, with a sinister wag of his head,
"By my horns, the good artist has lavished the red!
His home of coarse horror -- this house of the dead
Looks crimson from basement to rafter.
How strange that a civilised City--ho! ho!
'Tis their fatuous dream to consider it so!--
Which is nothing too lovely at best, should bestow
Such a liberal license on spoilers!
These mural monstrosities, reeking of crime,
Flaring horridly forth amidst squalor and grime,
Must have an effect which will tell in good time
Upon legions of dull-witted toilers.
Taken in through the eyes such suggestions of sin
A sympathy morbid and monstrous must win
From the grovelling victims of gloom and bad gin,
Who gapingly gaze on them daily;
A fine picture-gallery this for the People!
Oh, while this endures, spite of School Board and Steeple,
My work must be going on gaily!" 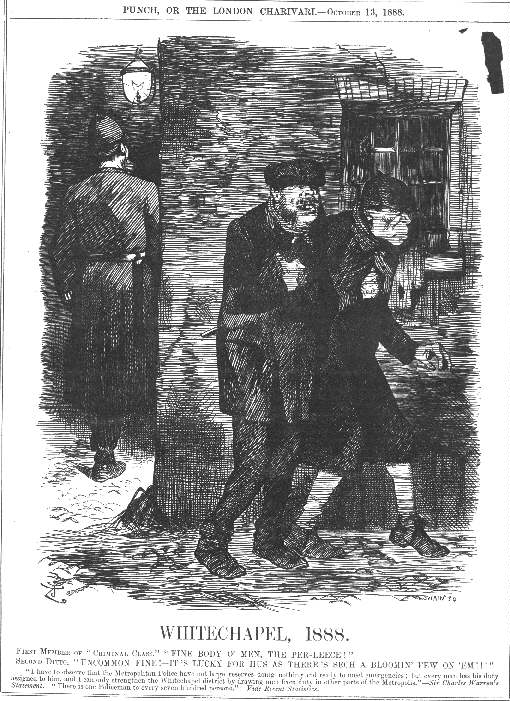