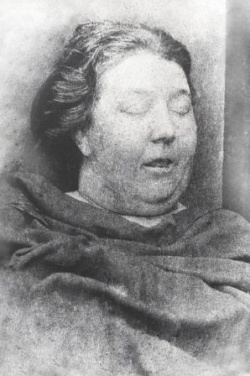 Martha's parents separated and in May of 1865 Charles was lodging alone in the house of Mrs. Rebecca Glover. The house was located at 31 Pitt Street, St. George's Row. His health was questionable, he suffered severe diarrhea in October and a surgeon was called to examine him. The surgeon found him troubled by his familiar situation and complaining of bad circulation and cold. According to his daughter Mary Ann, he also stated that he had a weak back and was unable to work.

On October 11th his estranged wife, Elisabeth, visited him for the first time since their separation. Over the next few days she visited often and on the evening of November 15th, both she and her daughter Mary Ann had supper at his lodging. The meal consisted of bread, butter, and beer. According to his landlady, Mrs. Grover, he was cheerful that evening.

At approximately 10:00 PM, he rose to go to bed and while removing his waistcoat he fell to the floor and died. As there was no evidence of any thing suspicious, the death was ruled as coming from natural causes. He was 59 years old.

On Christmas Day, 1869, Martha married Henry Samuel Tabram at Trinity Church in St. Mary's Parish, Newington. He was a foreman furniture packer. A short, well dressed man with iron gray hair, mustache and imperial. They had already been living together in Pleasant Place and moved to 20 Marshall Street in February 1871. The new house was very near by the house in which Martha was born.

Martha had two sons by the marriage, Frederick John, born in February 1871 and Charles Henry, born in December of 1872.

The marriage ended in 1875. Henry left due to Martha's heavy drinking. He gave her an allowance of twelve shillings per week for three years but reduced it to 2s 6d due to her pestering him in the streets for money. She had a warrant taken out against him and had him locked up. He had also learned that she was living with another man. At this time he refused to support her any further.

Henry Turner was a carpenter with whom Martha lived, off and on, for twelve years. He is described as a short, dirty man who dressed in a slovenly manner. He was young and had a pale face, light moustache and imperial. Their relationship also appears to have been greatly effected by Martha's drinking. Turner stated at the inquest into her death: "Since she has been living with me, her character for sobriety was not good. If I give her money she generally spent it in drink." Martha was in the habit of staying out late at night, usually not returning before 11:00 PM and occasionally staying out all night. Her excuse was usually that she had been taken with hysterical fits and had been taken to the police station. Turner had witnessed these fits and stated that they usually came about due to drunkenness.

In 1888 Turner was out of regular employment and making his living hawking cheap trinkets, menthol cones and needles and pins. The couple lodged in the house of Mrs. Mary Bousfield at 4 Star Place, Commercial Road. Bousfield described Martha as a person who would "rather have a glass of ale than a cup of tea." She also said, however, that she was not a perpetual drunk.

The couple left their lodgings without notice and behind in the rent approximately 4 to 6 weeks prior to the murder. Perhaps out of guilt, Martha secretly returned one night and left the key to the lodging without seeing the landlady.

Turner left Martha for the last time in July of 1888. At the time of her death he was living at the Victoria working man's home on Commercial Street. She tried to carry on earning a living through selling trinkets and prostitution. It is very likely that whatever small amount of money she made was spent on drink. Indeed, Turner is quoted as saying "If I gave her money she generally spent it on drink. In fact it was always drink. When she took to drink, however, I usually left her to her own resources, and I can't answer to her conduct then."

Her last known address was 19 George Street, Spitalfields (known as Satchell's Lodging House). Turner saw a destitute Martha for the last time on Leadenhall Street, near Aldgate pump on August 4, 1888. He gave her 1s 6d to buy trinkets for trade with which she might earn some sort of living.

On Bank Holiday Monday, August 6th, Martha went out with Mary Ann Connelly, who was known as "Pearly Poll." They were seen throughout the evening in pubs in the company of a soldier or soldiers. According to Pearly Poll, she and Martha picked up two guardsmen, a Corporal and a Private in the Two Brewers public house and drank with them in several pubs including the White Swan on Whitechapel High Street. 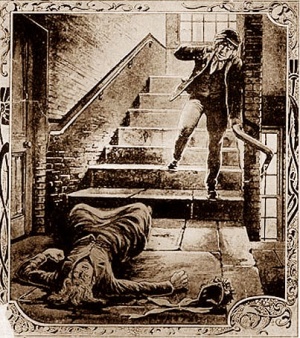 Discovery of the body of Martha Tabram, from Famous Crimes Past and Present, 1903.

Some time around 11:45 PM Martha and Pearly Poll went separate ways. Martha with the Private into George Yard and Pearly Poll and the Corporal into Angel Alley. Both, obviously, for the purpose of having sex.

1:50 AM: Elizabeth Mahoney returned to her home in George Yard Buildings. At the time that she ascended the stairs to her flat she saw no one or anything unusual in the building.

2:00 AM: PC Thomas Barrett saw a young Grenadier Guardsman in Wentworth Street, the north end of George Yard. Barrett questioned his reason for being there and was told by the Guardsman that he was waiting for a "chum who went off with a girl."

3:30 AM: Alfred Crow returned to his lodging in George Yard Buildings and noticed what he thought was a homeless person sleeping on the first floor landing. As this was not an uncommon occurrence he continued on to bed.

John Reeves left his lodgings in the George Yard Buildings at 4:45 AM. By this time the light was improving inside the stairwell. Reeves also noticed the body on the first floor landing but he was also aware that it was lying in a pool of blood. Reeves went off to find a policeman.

He returned with PC Barrett. Although not yet identified, the body was that of Martha Tabram. The body was supine with the arms and hands by the side. The fingers were tightly clenched and the legs open in a manner to suggest that intercourse had taken place.

Others who testified at the inquest include Francis Hewitt,the superintendent of George Yard Buildings and Mrs. Mary Bousfield (also known as Luckhurst), Martha's former landlady at 4 Star Street.

The post-mortem examination of Martha Tabram was held by Dr. Timothy Killeen (also spelled Keeling or Keleene) at 5:30 AM on the morning of August 7th. Tabram was described as a plump middle-aged woman, about 5'3" tall, dark hair and complexion. The time of death was estimated at about three hours before the examination (around 2:30-2:45 AM). In all, there were thirty-nine stab wounds including: 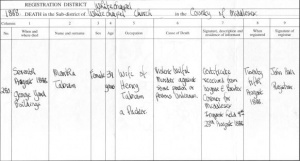 According to Killeen, the focus of the wounds were the breasts, belly, and groin area. In his opinion, all but one of the wounds were inflicted by a right-handed attacker, and all but one seemed to have been the result of an "ordinary pen-knife." There was, however, one wound on the sternum which appeared to have been inflicted by a dagger or bayonet (thereby leading police to believe that a sailor was the perpetrator).

Wearing at the time of her death: