Report on the work carried out on the “Maybrick Diary” at Staffordshire University between November 2004 and February 2005.

In this report we present the findings of the examination of inks from dated documents in the form of entries in a visitors book, and the comparison of their characteristics with those of the ink on the Maybrick diary.

The inks from the visitors book were chosen for examination as their entries were made at the same period as the diary was purported to have been written.

To the naked eye the ink distribution on the diary appears to be non uniform.  This is consistent with the document being written using an ink pot and nib rather than with a fountain pen.  Since the first patent for a fountain pen in the UK was granted in the 1880’s it is unlikely that they would have been in common use at the time the diary is supposed to have been written.

The VSC instrument utilises a variety of illumination conditions and camera filter settings to analyse the light reflected from a document.  The inks in the visitors book exhibited two distinct types of behaviour.  The first gave no distinctive response under any combination of illumination and camera filters, whilst some of the inks displayed a weak, but distinct, infrared luminescence as shown below in Figure 1 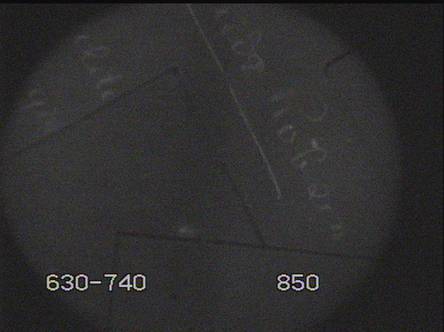 Figure 1 Infrared fluorescence in an ink dated in the 1880s

This shows a page from a guest book with entries dated in the 1880s.  The signature of Mary Robinson fluoresces under the lighting conditions used, namely an illumination with visible light in the wavelength band 630 – 740 nm with a high pass filter set at 850nm to exclude all the reflected light at wavelengths below 850nm.   Light above this wavelength falls in the infrared region of the spectrum and is thus not visible to the naked eye.  With these filter settings the writing from the adjacent entries in the book are not visible.

The ink that the diary is written with showed no significant features, showing no fluorescence at any settings.  By applying higher wavelength filters to the reflected light it was observed that some of the lettering faded at different wavelengths.  An example of this is shown in Figure 2. 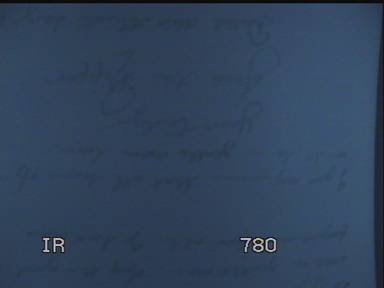 Figure 2 The different responses of the ink due to varying application density. The page is viewed upside down due to physical constraints of fitting the diary into the instrument.

We attribute this to the higher density of ink deposited on the page, as a result of the nib being replenished by dipping into an ink pot, as discussed under visual examination.

During the examination of the ink numerous fluorescent marks were observed throughout the diary.  At present we are unable to explain their nature or origin.  Two examples of theses are shown in Figure 3 below 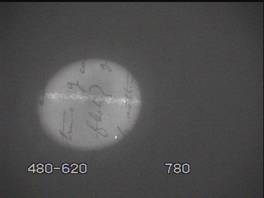 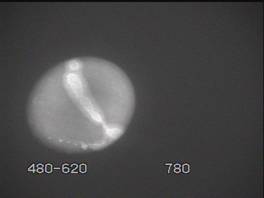 The optical examination reveals no characteristics that are inconsistent with the diary being written in the 1880s.

The infrared spectra of the ink lines from the visitors book and diary were obtained using an infrared microscope operating in ATR mode. This requires physical contact between the instrument and the object under study.  The spectra obtained show the same general characteristics irrespective of the part of the ink line studied or the page sampled.  The spectra from the dated entries in the visitors book show essentially identical features.  These characteristics are entirely due to the spectrum from the paper itself, and we can find no characteristic peaks that can be attributed to the ink.  A typical set of spectra are shown in Figure 4

(lower trace) from the Maybrick Diary

This probably arises from the ink applied being absorbed into the body of the paper leaving a very low effective concentration at the surface. Thus any spectrum from the inked area is essentially masked by the strong response from the paper itself.  We have observed similar effects with modern fountain pen inks the spectra of which are again typical of the paper that they are applied to.

Raman microscopy is a non invasive non contact method of analysis where light scattered from a low powered laser focussed on the ink line is analysed to give a spectrum.  Using a red laser at 685nm we were unable to observe any significant features from the diary ink or from other inks used in the visitors book.  The spectra of the ink lines and the paper itself are largely featureless and add no information on the age of the ink.

In summary the examination of the optical, infrared and Raman spectroscopic properties of the ink on the diary have yielded no significant data on the ink itself and are consistent with it having being written either at the purported date or at a more recent date.