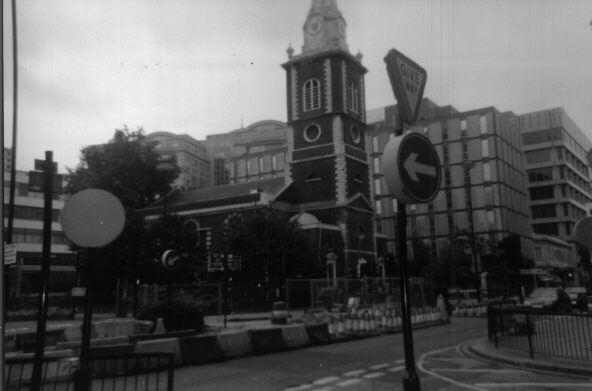 Above: St. Botolph's Church, on Aldgate High Street. This church was known as the prostitutes' church, because the ladies would walk around it in order to attract clients (it was against the law to stand in one place and solicit). It was in this area that Catherine Eddowes was seen drunk the night of her murder. Photograph courtesy of Mr. John Smithkey III.

Above: A view of St Botolph's Church from Hounsditch in Aldgate. Taken: Thursday, May 13, 1999. Photograph courtesy of Johnno.

St. Botolph's Aldgate. The most easterly church in the City of London. Designed by George Dance the Elder and built 1740-44. The church's predecessor was built immediately outside the old Roman wall that once encased London. Used to be known as the "Prostitutes' Church". Pictured from the west, on Aldgate. Photograph courtesy of Viper.