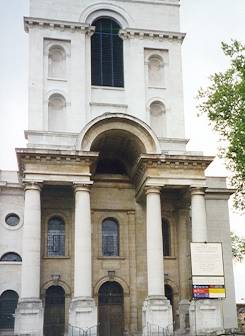 Above: A view of Christ Church, Spitalfields. Christ Church is located on the corner of Fournier Street and the east side of Commercial Street. Taken: Thursday, May 13, 1999. Photograph courtesy of Johnno.

Steeple of Christ Church, Spitalfields. The impressive steeple is 225 feet high. Once crocketed, it was altered in 1822 and again in 1841 after a fire and lightning strikes to its brooched spire design. Photograph courtesy of Viper.

Christ Church, Spitalfields. Designed by Nicholas Hawksmoor, 1714-29, under the Fifty Churches Act. The church, fronting onto Commercial Street and pictured here from Brushfield Street, dominates the locality. Almost derelict in the 1960s, it remained in a poor condition until 1994 when, thanks to the Friends of Christ Church, Hawksmoor's masterpiece began to be slowly and lovingly restored to its former glory, subsequently with the help of National Lottery money. The tree to the right is in the churchyard, which was known to locals as 'Itchy Park' and is described in Jack London's 1903 book, The People of the Abyss. Photograph courtesy of Viper.