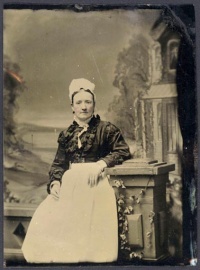 One of the few alleged Ripper victims actually to have been killed outside of London, Carrie Brown remains, for the most part, a mystery. An older, American prostitute, Carrie's lifeless body was discovered in the room of the East River Hotel on the Manhattan waterfront of New York, U.S.A., on the night of April 23-24, 1891. Before the release of Sugden's The Complete Jack the Ripper, very little was known of her, and even less was actually deemed worth writing about. She was, and still is, mentioned solely as a connection to the suspect George Chapman, who at the time of the murder was living in nearby Jersey City, New Jersey.

Known fondly by her acquaintances as "Old Shakespeare" due to her tendency to recite her favorite poet's sonnets after a few drinks, Carrie Brown checked into the East River Hotel, on the southeast corner of Catherine Slip and Water Streets, with a man between 10:30 and 11:00 on the night of April 23rd. Her lifeless body was discovered lying on the bed the next morning, naked from the armpits down, according to the night clerk who found her. Her body was mutilated, and she had been strangled, but there are few details known about her injuries. The details of the autopsy were played down a great deal by the press, and all that we can know for sure is that there were 'cuts and stab wounds all over it.' The doctor who performed the autopsy, named Jenkins, is said to have thought that the killer had attempted to completely gut his victim. Other than that, the exactness of her injuries remain a mystery.

The man with whom she had entered was never traced, although an Algerian Arab named Ameer Ben Ali was arrested and later convicted for the crime. Sentenced to life imprisonment, but vehemently denying his guilt, Ali was released eleven years later when new evidence showed that bloodstains found in Ali's room (which were primarily used to secure his conviction) might have been accidentally strewn by an irresponsible investigation. Governor Benjamin Odell had him released and the American Judicial System declared him innocent of the crime -- so who killed Carrie Brown?

The man with Carrie Brown that night was seen only by one witness, an assistant housekeeper at the East River Hotel named Mary Miniter. She described her companion as:

Admittedly, Miniter did not get a good long look at the suspicious man. As he booked the room with Brown, Miniter claimed that he had remained inconspicuous in the background and seemed 'anxious to avoid observation.'

The name of Jack the Ripper was quickly heard around the rumour mill, and newspaper headlines brought the story back for another turn.

Newspapers refused to let the matter stand where police wished to leave it, which was far, far away from the spectre of Jack the Ripper. The New York Times wrote:

There has not been a case in years that has called forth so much detective talent. Inspector Byrnes has said that it would be impossible for crimes such as Jack the Ripper committed in London to occur in New York and the murderer not be found. He has not forgotten his words on the subject. He also remembers that he has a photographed letter, sent by a person who signed himself Jack the Ripper, dated 'Hell', and received eighteen months ago.

It was this statement which has prompted one theory concerning the death of Carrie Brown which says that the New York Police Department was involved. Having made such a boast that 'if Jack the Ripper came to America, he would surely be caught,' these theorists claim that they had Brown killed and planted the evidence in Ameer Ben Ali's room the next day while 'investigating.' This would serve to further embarrass the 'competing' London police, while giving praise and adulation to the N.Y.P.D..

Though this story is far-fetched indeed, the logic behind it simply doesn't make sense. If the N.Y.P.D. had wanted to cast themselves in the light of 'the force who caught the Ripper,' they would not have played down the possibility of a connexion with Jack the Ripper. Still, it does explain the reason for the bloodstains suddenly 'appearing' in Ali's room, if indeed they were as a result of the police and reporters who flooded the room the morning after the murder.

Another story emerged in 1901, accusing a Danish farmboy who was working in Cranford, New Jersey at the time of the murder. According to his employer, the man was absent that night, and returned home in the morning, only to leave a few days later, never to return. Soon after, the employer found a key similar to those used in the East River Hotel as well as a bloodstained shirt in his room. Unfortunately, the fact that this information was revealed an entire decade later must make it the object of suspicion.

And so the murder of Carrie Brown remains unsolved. The question of whether or not it was a Ripper-related murder can not, at present, be sufficiently answered. Detailed medical reports must be found concerning the exact nature of her injuries, and these must be matched to the M.O. of Jack the Ripper's canonical victims. If they do indeed match the injuries of, say, Chapman or Eddowes, then some serious rethinking concerning the case of Jack the Ripper needs to be done.